Getting big on Microsoft Teams: Why ShareGate should be your Teams first pick

BlogProductivityMicrosoft Teams and SharePoint integration: How to adopt Teams when you already use SharePoint
Skip to content

We spoke to Michal Pisarek, six-time Microsoft SharePoint MVP and founder of Orchestry Software, about how to roll out Teams when you have existing SharePoint team sites.

Part of that popularity is due to the fact that Teams is a lot more than just a chat app. The true power of Teams lies in its integration with the rest of Microsoft 365, and its emergence as a one-stop-shop collaboration hub.

In a survey conducted for our benchmark report, State of Microsoft 365: Migration, Modernization, and Security in 2021, 44.2% of IT professionals said the ability to deploy Teams/connect Teams to existing SharePoint sites was their top motivator for adopting Microsoft’s modern workplace.

If you already use SharePoint and actively use existing team sites, there’s a few things you should know if you’re thinking about rolling out Teams anytime soon.

What is a SharePoint team site?

Before we dive into Microsoft Teams, we need to set a few things straight. To embrace the modern workplace, you’re going to have to go from classic to modern SharePoint. And to go modern, you’re going to need to go flat.

That’s because Microsoft Teams only works with top-level sites. If you already have SharePoint established and your infrastructure includes a lot of subsites, those subsites won’t work with Teams. There is a way to logically restructure—with hub sites—but that happens on the SharePoint side of things.

The modern SharePoint Online experience offers two templates to create a new site. Depending on the site’s intended purpose, you can choose to create either a:

“A SharePoint Online team site is essentially an online workspace where you can go to collaborate within your organization,” Michal Pisarek tells ShareGate. “Instead of having your documents stored in file shares and email conversations, SharePoint lets you consolidate everything in one secure online place.”

Aside from allowing you to store and collaborate on documents, SharePoint team sites also include some advanced capabilities to manage your content, such as allowing you to create and organize lists of information.

So if SharePoint’s gift is in managing your documents (as Microsoft MVP Sue Hanley told us), then how does Microsoft Teams fit into all of this?

To be clear, Microsoft Teams and SharePoint are two completely different platforms with different capabilities and uses—so to compare the two isn’t really accurate. It is, however, important to understand how the two integrate with one another.

When people deploy Teams, there’s a lot of confusion about where they should be working on files and where they’re stored because they see the File tab within Teams.

I think the biggest misconception people have is that Teams does everything itself—all the file storage, and if you’re using videos it does all the video storage, and all that sort of stuff. A lot of organizations think they can roll out Teams without rolling out SharePoint, and that’s obviously not the case.

Pisarek says he has even come across companies that want to roll out Teams because they hate SharePoint. At which point he has to explain that if you don’t have SharePoint Online enabled, Teams users won’t always be able to share files within the app. (Except if you’re using one-on-one chat—in which case you’re actually using OneDrive for Business, so you’ll need to have that enabled.)

More than a standalone app

But Pisarek says you shouldn’t let users get too tripped up by where things are stored.

“If an organization is deploying Teams, I would encourage your users to use Teams as that main entry point into the rest of Microsoft 365. You don’t really need to tell your users where that stuff is stored, they don’t really care. I think as long as they can get access to their documents—and they can through Teams—then I think they’re really happy.”

For people that aren’t super technical, Microsoft 365 can be confusing to work with. In the past, users had to navigate between multiple apps with different, sometimes overlapping, capabilities. Now, Teams helps stitch everything together. Remember: it’s a chat tool, but it also functions as a collaboration hub.

According to Pisarek, the real power of Teams is that it simplifies the whole experience for people working with Microsoft 365.

I like to think of Teams as a window on the world. It shows you everything—not just SharePoint Online, but all of the Microsoft 365 apps—in a single pane of glass.

Anytime you create a new team in Microsoft Teams, you automatically create a SharePoint team site. But if you already use SharePoint, you probably want to integrate the two apps in a way that builds on—not duplicates—what you already have.

So what are some best practices to follow if you already have SharePoint and decide to deploy Teams?

Organize your files in SharePoint

If SharePoint is going to be storing and managing all of your teams’ documents, it’s a good idea to make sure everything is organized before you bring Teams into the mix.

“From a SharePoint perspective, it’s just making sure that people are using some of the more advanced features of the document libraries. So things like versioning, maybe metadata in the form of columns.”

If you’re not taking advantage of SharePoint’s more advanced content management capabilities, says Pisarek, you’re essentially just using SharePoint as a file share that’s up in the cloud. Which is fine, in and of itself. But then you’re not getting everything out of Teams that you could be.

“You’re essentially telling people, ‘Stop, try to send less emails. Instead of using multiple different tools, now try to use this one tool called Teams and see if you can make it work.’ So having everything properly organized on the SharePoint side of things will help when it comes to rolling out this very new and very different way of working.”

Create a Microsoft Team from an existing SharePoint site

If you have an existing team site for a dedicated department or project, you’re probably using it to store documents and communication. But you might realize you want more ad hoc chat capability, which is what Teams is going to allow you to do.

“In that case, you can create a new team associated to that team site,” says Pisarek. “That’s going to give you the ability to manage your SharePoint files through Microsoft Teams. And the power of that is that you’re moving all of the information and all of the conversations that you have into Microsoft Teams and combining that with SharePoint Online.”

The easiest way to do this? You can create a dedicated team from within the existing SharePoint team site.

Creating a team from an existing SharePoint team site means you’re building on the resources you’ve already invested in, not starting over from scratch. This method can also help minimize the creation of duplicate and unnecessary teams if coupled with a forward-thinking governance plan. Which brings us to our next point.

Plan ahead for Microsoft 365 governance

The single most effective step you can take to ensure your Teams rollout and SharePoint integration are a success?

“In general, I think the best practice you can have for either Teams or SharePoint is a good governance plan in place. I think that is the single biggest thing,” says Pisarek.

I think the single best practice you can have for either Teams or SharePoint is a good governance plan.

A truly successful governance strategy plans for every stage of your Teams rollout: before, during, and after it’s been deployed.

“Having a whole bunch of training and adoption beforehand, as well as ongoing governance strategies, is super important.” 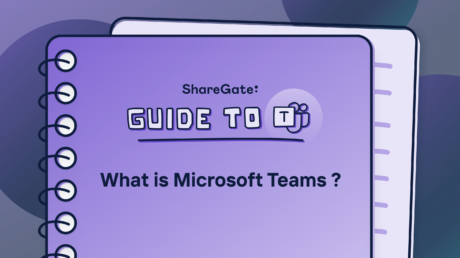