It’s finally here, Delve (codename Oslo) announced at the SharePoint Conference in March 2014. I’ll be honest it’s something I have been looking forward to since it was announced. The promise of finding what you need before you go looking for it, well I don’t think I have to tell you why I am excited.

What is Delve exactly and why should you care

That’s a great question, one that my colleagues were not shy to ask today with all the buzz going on around its’ release. If I had to describe the new Delve in one sentence, it would “A smart interface to the Search engine”. I’ve written about it before in “We shouldn’t have to search for our SharePoint or Office 365 documents” the problem we are still trying to solve is finding our content. That is Delve’s purpose, to present in front of us what we need before we even ask for it. 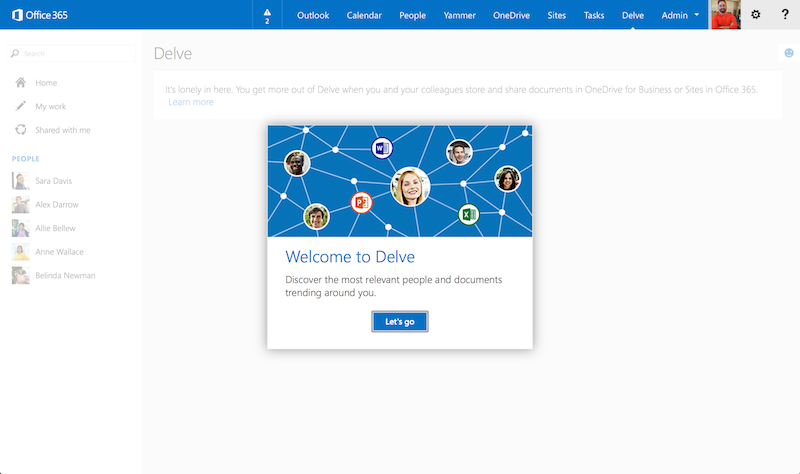 Have a meeting in your agenda with John in an hour? Delve will show you the related documents and John’s recently modified documents in Delve. It’s contextual and yes of course it does security trimming so you only see what you have access to. Many coworkers are talking about a document in Yammer but you are not necessarily in the group or perhaps just missed the conversation, well Delve will show the document as trending.

Again, Delve’s job is to be a smart interface to the Search engine, allowing you to find what you are looking for but with the power of Office 365 and the cloud behind it.

You can look at the official page that explains Delve as well. My friend Corey Roth has also done a quick look using screenshots of Delve.

Delve is a mere tool, what was really introduced is Office Graph

The new cool kid in town, Office Graph will be the talk of the party or, as we like to say in the SharePoint community, SharePINT. It allows you to leverage the immense power that Microsoft has in Office 365 and give you the answers to your questions. In other words, you can see it visually as a graph that links the different parts of Office together. Imagine having to calculate what every single employee in your organization has clicked on, modified and opened. What conversations have they started and on what, are they missing something already talked about. When are their meetings and do they have the right documents for it. Office graph does all the heavy lifting and in turn allows you to query against it. Delve is a tool that uses Office Graph to display the information you see.

I am expecting to see a lot of  third party tools to come out in the space and this will be very exciting. We are entering an era of Machine Learning and leaving behind the old static world.

Don’t forget that this is the first update of Delve and as the blog announcing it suggests, a milestone. We are going to see many things coming in this space and it is very exciting to be part of it.

Hi everyone, and welcome to another episode of Between Two Farms. My name is Benjamin Niaulin. I’m a SharePoint MVP I work here at Sharegate in Montreal.

I thought that this week I would look over the brand new Office Delve released today and do a short review. The blog post by Microsoft with Julia White announcing this today was called a milestone. This is great, because it lets us see that there’s no longer going to be a release and then we’ll see you in three years. It’s just an update among the many future updates that are coming and making this a lot better as time goes by.

Everything that we’re going to see today, please bear with me. This is the first day of the release of Delve. Not everyone has received Delve yet. We may see things that are going to change drastically and get added.

This is for you to be able to see a short video on how it looks. This is a demo environment. It is not an environment in production where I’m working. This is a Microsoft Office demo.

I logged in as Alex Darrow, a fictional user. The first thing I see in my Delve on my home screen is it looks like documents that I have modified or worked on. I can see who modified it recently. I can see what’s been going on with the document. Of course, depending on the documents, and this is a demo environment, I can see different information. Because of Office Web Apps, I can see the contents of a document without having to open it.

It seems the scroll has a limit, but I’m not sure how many. I haven’t counted it. There is definitely a limit. It doesn’t endlessly scroll down. It could be the last 50 or top 100. Who knows? We’re probably going to get that information pop up very soon.

Depending on the document, you should be able to see different views. I just launched this, so not all of them have it. You will have the number of views, because this uses… You can click. It will open. You won’t have to open… The beauty of this is it brings all the Office 365 pieces together. In here, I’ve never opened my application. I’m using a map, using Safari, and I’m accessing my documents. I can edit them. I can work with them. I can see who’s modified them recently. We will be seeing the different apps coming to the Windows Store, the Windows phone, and hopefully all the other devices as well, which is extremely cool.

First, hold on a second. There’s a colleague of mine that was asking me earlier. He was like Ben, for us that are not in the Microsoft world and SharePoint world every single day, what exactly is Delve supposed to be doing, and why should we be as excited as you are about this.

What is Office Delve?

Delve was announced in March at the SharePoint… that they wanted you to know where they’re from. The idea was we’re tired of having to find the content that we want to work on. It’s not because I’m a SharePoint M.V.P. that I don’t have the same issue or problem. There is content everywhere. There are lots of SharePoint sites. There are lots of document libraries. Yes, I put metadata. Yes, I tagged it. That’s not everyone everywhere. This is a very good SharePoint environment. I still have issues in finding the content that I’m working on all the time.

I’m really looking forward to something like Delve that was announced, because it promises to bring you the content before you go looking for it. The idea is let Microsoft do all the work with the app on Office 365 and the power of the Cloud so that based on my calendar, my Outlook, my emails, the people around me, and the conversations that I have on Yammer, it will choose for me what I’m probably looking for or what I’m working on at this time of day. In my calendar I may have a meeting coming up soon and this presentation is related to it, so it’ll bring it up on my home screen of Delve.

This is awesome. As we go on, and as we’re adding documents in our OneDrive for Business and our team sites, we don’t want to have to worry where it is. We just want to make sure it is where it’s supposed to be, that it’s tagged properly, and that it has the right permissions, which, by the way, I can check right over here by clicking on the little icons. I can jump to the sharing or the permissions to see who has access to this.

This is great, because it is what I’m looking for. It doesn’t matter to me to have to navigate files and folders and guess where the documents are. I just want to access it. I’m really excited about this.

I notice there’s also a send an email. I’ve checked. It opens up my Outlook and puts the URL to the document so I don’t even have to send it.

So far, this is very, very cool. Let’s take a look at what else is in Delve. There’s my work. Awesome. I can see all the documents that I’m working on and where they are at that moment, whether it’s on this side or in my OneDrive for Business. I have the information that I need. I can quickly browse them. Because of Office Web Apps and the preview, I can see whether or not it…

As you may have noticed, there are five people here. Why are there only five? I’ve checked and logged in in different environments. It seems to be five people I’ve been working with recently sharing documents with.I imagine this will change based on who I’m working with often. I can quickly jump to their Delve page and launch a link. I’m sure we’ll start seeing presence from links, see what they’re modifying and what’s trending around them, and that many people, or different views, or clicks, or Yammer, or likes and shares. This is the purpose of Delve, to bring the things that everybody’s working on and make sure you get the right information that you’re looking for without going to look for it.

What I’ve noticed also recently is by typing in search I can start asking for what I’m looking for, like marketing. You can see that it starts filtering everything. I can see marketing campaigns and quickly get to that person, or just type marketing materials. It would help if I spelled it correctly. I can get some of the marketing. It’s a search. It uses discovery and search to get me the information that I need without having to wait for it, specifically not having to go and look for it. For me, this is really an upgrade of the interface of the search engine, which is extremely cool.

I’m looking forward to seeing the updates come along. Everything that you saw here today may change. This is the first day. Not everybody has received Delve yet. I do expect some changes to come. Thank you for attending another episode of Between Two Farms. Of course, I’ll see you next week.

Skip the scripts with pre-built and custom reports.