How to query resources at scale with Azure Resource Graph

14 min read
Recommended in IT industry

Migrate to SharePoint and Office 365, reorganize and restructure content, and monitor and secure your environment.

Microsoft’s May 4th Future of SharePoint event is still being discussed, digested, and dissected. The event saw the tech giant’s leading execs announce further progress in the company’s journey towards its cloud-first, mobile-first vision. Jeff Teper shared with us a number of updates and improvements to their file access and sharing platform, OneDrive for Business. Additionally, the much-anticipated SharePoint Server 2016 was finally made available to us all.

The latest iteration of Microsoft’s collaboration platform has inspired us to go back to the basics (now that the basics have changed) – and today’s entry in our SharePoint 101 series explores what’s new in terms of the platform’s user interface (UI). We’ll look at the new-found familiarity between Microsoft platforms, and understand the best new UI features to get you feeling at home with the platform.

Much of the inspiration behind SharePoint 2016 has come from the power and popularity of the cloud. The new on-premises SharePoint is derived from the same code used to deliver SharePoint Online – which is currently the most tried-and-tested version of SharePoint to date. From new hybrid capabilities to standardized APIs, this united code base has seen Microsoft take all their learnings from the cloud and apply them to the benefit of the new on-premises version.

What a unified code base also means is a number of changes to the user interface to more closely align the user’s experience between SharePoint on-premises, SharePoint Online, and Office 365. So, if you're one of the many that uses Office 365, navigating your way around SharePoint 2016 will be a more consistent experience.

Microsoft listened to the feedback of thousands of IT pros, implementing changes that would be valued by experienced users of the platform. In terms of the user interface, there are a number of noticeable improvements to navigation.

The simpler navigation and commands found in SharePoint Online have transitioned to the new SharePoint Server. The app launcher – found in the same top left-hand corner as in Office 365 - gets you to your apps from anywhere in SharePoint – a centralized menu allowing users to quickly launch applications, browse sites, and access personal files from a single panel.

From a UI perspective, a user can now sync those compatible apps to both their environments, so whether they’re working in Office 365 or SharePoint Server, the same apps will be just a touch of a mouse button away. Creating a much more seamless and welcome experience.

Site libraries have been updated to get you to the actions you want to carry out quicker. Located above lists are 3 new buttons – “New”, “Upload” and “Share”. “New” lets you create a brand new Office doc: be it Word, PowerPoint, Excel, or a OneNote notebook. Sharing documents has gotten a lot easier, too. By clicking “Share”, you can type in any user’s name to share content with them rapidly. Uploading, sharing, and offline synchronization capabilities are all a single button click away, removing the previous necessity of the ribbon.

Users can also pin sites to the sites page. A pinned site sticks to the top of your list of followed sites for instant access. In just two simple processes, you could create a brand new document and pin it to the top of your site, removing the need to ever have to search for it again.

Microsoft found that more users engage in more effective collaborative experiences when they have a simple control surface available to them within document libraries. As a result, the once-staple ribbon has been removed, and replaced with the more reserved and straightforward information panel that will also appear in OneDrive for Business.

Probably the biggest new feature in SharePoint 2016 is hybrid search. Announced early on, the long-awaited feature was available to be tested in Beta versions of the platform and, rightly so, turned many heads. While hybrid search may have stolen the headlines, it’s not the only instance of new hybrid functionalities in SharePoint.

The new hybrid SharePoint sites wizard lets you configure a server-to-server connection to join features of both environments. This offers users a simple way to keep track of their most frequently accessed sites, whether they are located on-premises or in the cloud.

Navigate SharePoint 2016 with Power and Purpose

Alongside a cloud-inspired infrastructure, as well as compliance improvements, enhancing user experience was one of Microsoft’s three key areas to drive value from the new SharePoint 2016. Many of these UI improvements will get you moving around SharePoint and working with documents at a much more efficient pace.

Search for documents from more locations than ever, access them quicker, make changes and send them to colleagues faster. Access the app of your choice from a single pane, and feel at home whether you’re on-premises or in the cloud. Microsoft has added a host of new functionalities to get you working smarter, and more effectively, no matter what version of SharePoint or Office 365 you are accessing.

Wondering how to deploy Microsoft Teams effectively? Microsoft MVPs explain why you should keep "self-service" features enabled to... 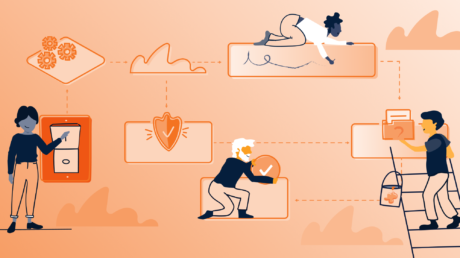 With Microsoft's announcement that SharePoint 2010 workflows will be retired starting August 1, 2020, the race is on... Microsoft's free SharePoint Migration Tool includes Teams functionality—but is it capable of helping you with your Microsoft Teams...