As an admin, you have some important decisions to make around team creation and provisioning.  Let’s take a look at all the ways to create a team in Microsoft Teams and bring people together around a common goal.

Welcome back to our guide on how to use Microsoft Teams!

In the first part of this series, we discussed several different scenarios where Microsoft Teams might be used to enhance collaboration in the workplace. Now, let’s focus on how creating a team in Microsoft Teams can help to organize work around a specific project.

There are a few ways to go about creating a team, so let’s look at some teams creation use cases that you might apply within your own organization.

Before we create a new team, we need to double check that a team for that project doesn’t already exist. Microsoft Teams doesn’t warn you about duplicates, which can cause problems for the connected Microsoft 365 services—like SharePoint team sites, plans in Planner, and groups in Stream—that are created along with a new team.

For example: Let’s say we’re starting a new project to help our customer, Fabrikam, transition to the modern workplace.

We already have a team for everyone in our sales department called Sales.

Microsoft Teams will let me create a new team—also called Sales—with its own SharePoint site collection. But, because you can’t have two site collections with the same name, a random series of numbers will be added to the end of the new site collection URL.

Oh my—that’s going to create a lot of confusion.

What can we do to prevent this situation?

There’s a button in the lower left corner of the Microsoft Teams app called Join or create a team. Here you can see an overview of all your public teams, or search for a team by name:

All we have to do is hover our cursor over the sales team’s icon, select Join team, and start collaborating.

Going back to our project scenario, we can see that there’s no existing team for our customer Fabrikam. Let’s go ahead and create a new one:

We now have three options:

Let’s take a closer look at these options.

Build a team from scratch

3. Choose Build a team from scratch.

4. Next, you’ll want to choose what kind of team you want this to be: 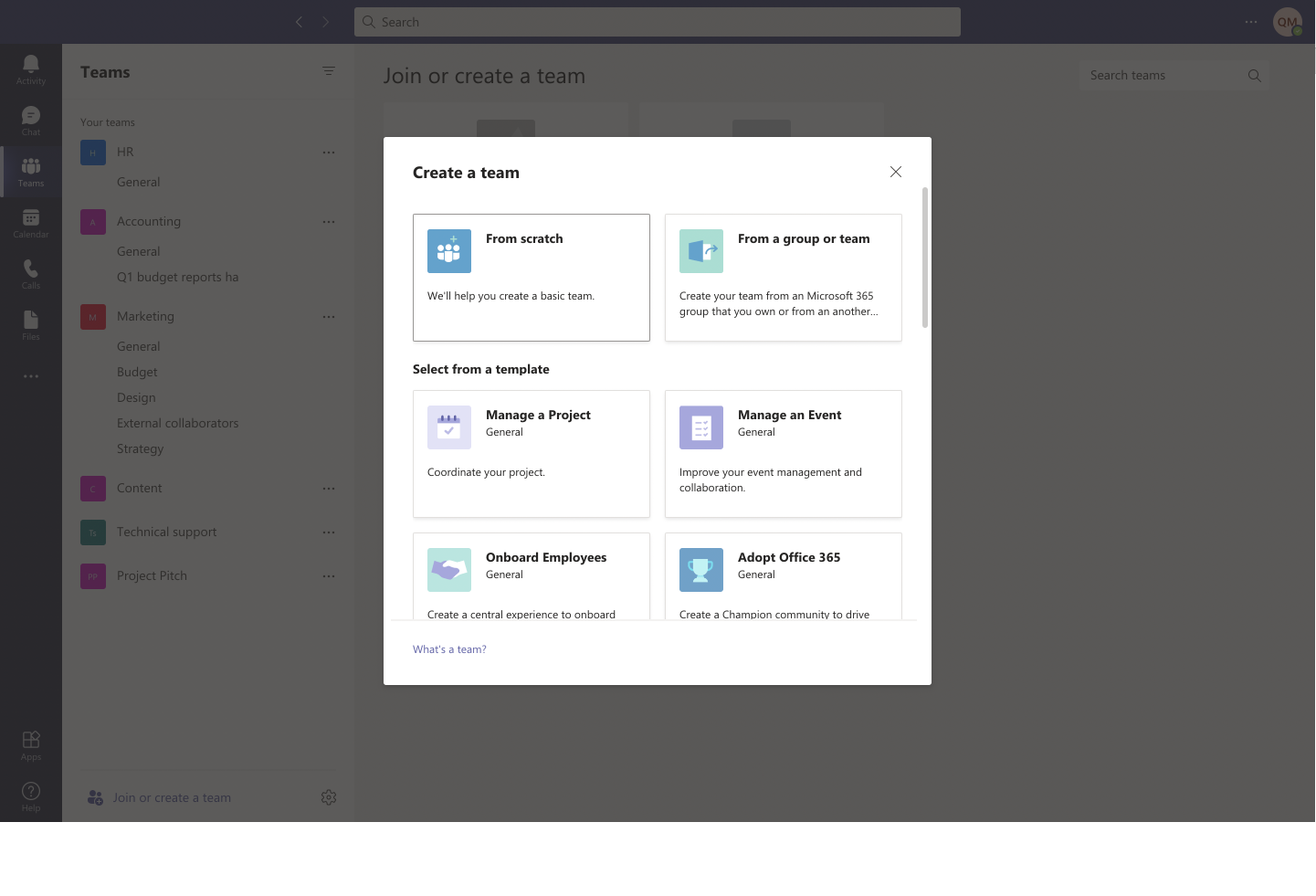 To limit content and conversation to a specific set of people, choose Private.

For a community or topic that anyone in the organization can join, choose Public.

5. Name your team and add an optional description.

Great work, you’ve just created a team from scratch! As the team’s creator, you are automatically assigned as the owner. You can now add team members and create channels for them to discuss and collaborate in.

Because the power of the modern workplace lies, in part, with the enhanced ability to share knowledge and expertise, I always recommend creating public teams.

Of course, there are exceptions—especially where sensitive information is concerned—but private teams shouldn’t be the default.

The last step is adding members and owners:

Be sure to have at least two owners per team. This guarantees a backup contact in case one of the owners isn’t available.

Create a team from an existing Microsoft 365 group or team

That means these services aren’t automatically connected to a team.

By selecting an existing Microsoft 365 group, we can reuse the existing structure and settings for our new team. Microsoft Teams lets you move away from communication through email or SharePoint news, and start using chat.

You’ll then be prompted to select a group or team as the starting point of your new team.

You can also decide what you’d like to carry over from the existing team or group:

Create a team from an existing SharePoint site

If you have an existing team site for a dedicated department or project, you’re probably using it to store documents and communication. But you might realize you want more ad hoc chat capability, which is what Teams is going to allow you to do.

Creating a team from an existing SharePoint team site means you’re building on the resources you’ve already invested in, not starting over from scratch. This method can also help minimize the creation of duplicate and unnecessary teams if coupled with a forward-thinking governance plan.

One of the key decisions you’ll have to make within your organization is to determine who has permission to create groups or teams.

The shape your Teams environment takes should be informed by its function. And no one knows what they’ll need from Teams better than the users who are working in it every day.

For this reason, we recommend keeping self-service enabled for all users.

First of all, enabling self-service features boosts user adoption. That’s a great place to start: getting people using tools you’re adding for them.

Secondly, it helps you save time and manpower with users handling day-to-day tasks that they’re best suited for.

Whichever method you use to create and provision teams, it’s important to teach users how to use the tools you provide for them. Microsoft’s End User Training for Microsoft Teams is a great resource to help guide users through the ins and outs of Microsoft Teams.

That’s a wrap on team creation! We’ve identified all of the different ways to create a team, and the benefits of letting users create their own teams. Thanks for tuning in, and good luck to you as you go forth and create your own teams!

Take your Microsoft 365 management to the next level with ShareGate

What is Power Automate in Microsoft Teams?